A solar inverter or PV inverter, is a type of electrical converter which converts the variable direct current (DC) output of a photovoltaic (PV) solar panel into a utility frequency alternating current (AC) that can be fed into a commercial electrical grid or used by a local, off-grid electrical network. It is a critical balance of system (BOS)–component in a photovoltaic system, allowing the use of ordinary AC-powered equipment. Solar power inverters have special functions adapted for use with photovoltaic arrays, including maximum power point tracking and anti-islanding protection. 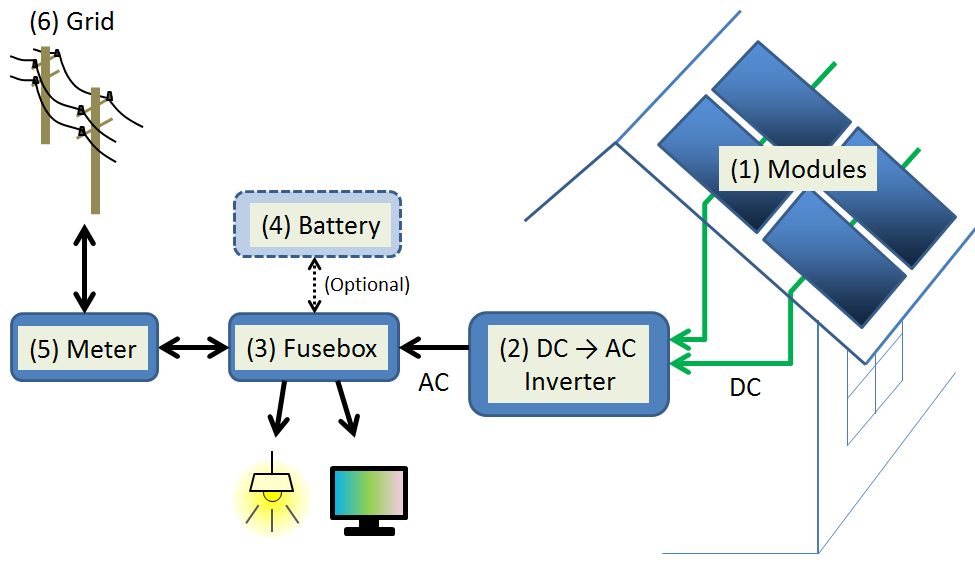 Solar inverters may be classified into three broad types:

used in isolated systems where the inverter draws its DC energy from batteries charged by photovoltaic arrays. Many stand-alone inverters also incorporate integral battery chargers to replenish the battery from an AC source, when available. Normally these do not interface in any way with the utility grid, and as such, are not required to have anti-islanding protection.

which match phase with a utility-supplied sine wave. Grid-tie inverters are designed to shut down automatically upon loss of utility supply, for safety reasons. They do not provide backup power during utility outages.
Battery backup inverters, are special inverters which are designed to draw energy from a battery, manage the battery charge via an onboard charger, and export excess energy to the utility grid. These inverters are capable of supplying AC energy to selected loads during a utility outage, and are required to have anti-islanding protection.

manage photovoltaic array, battery storage and utility grid, which are all coupled directly to the unit. These modern all-in-one systems are usually highly versatile and can be used for grid-tie, stand-alone or backup applications but their primary function is self-consumption with the use of storage.

Please contact us, if you need to supply an inverter for your PV system.

The ArtinA Renewable Energy Engineering and Commerce Company, is a knowledge based company, has been registered in Tehran for the purpose of developing the use of renewable energy, especially solar energy. The company also is ready to carry out joint research projects with universities and research institutes in the field of the construction of the third generation solar cells , Perovskite Solar cells&panels.

Presenting the article and supporting the 8th Conference of Nanostructured solar cells at Sharif University of Technology.